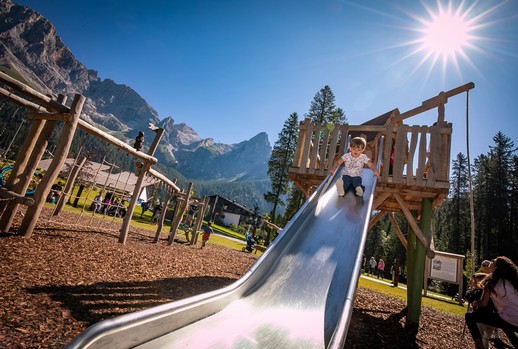 Every town has its playground, in areas close to downtown but sheltered from traffic and often reached along cycling paths. In San Martino di Castrozza, in the Nasse area, there is the small Plank lake with games and lots of space to play. There are very nice trails that lead into the forest. Downtown and near the meadows of the Col district the small playgrounds offer amusing and innovative play structures, from the helicopter to the fountain with the water trail, plus the more traditional slides and swings. In the valley floor each playground is different but they all share a common feature: fun is guaranteed. The “less small” can relax on the benches protected by the abundant vegetation. The most popular playgrounds are Parco Vallombrosa at Fiera di Primiero and the one in Imèr near the sports centre, featuring an original water game designed to be used also by disabled children. Along the cycling path there are those of Siror and Mezzano. The playground of Tonadico is just two steps from the town centre, and that of Transacqua is next to the church. Soon to be opened in the Isolabella district is a new playground with very original games. Pieve has its playground at the end of Via San Rocco and in the Melas district, just below the small church of Colaor, that can be reached in a short time along a steep trail. The breathtaking panoramic view is worth the effort! Valle del Vanoi and Sagron Mis as well offer wide playgrounds where smaller children can run and play in safety, meeting and making friends with many other children.