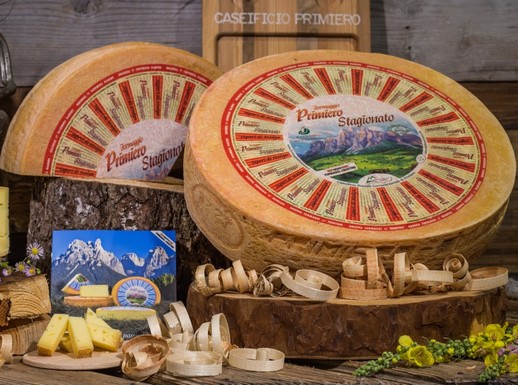 THE ORIGINS
At one time, in Primiero, almost every family had cows for their own sustenance, and still today, rearing, work at the shepherds huts and fresh milk that is harvested every day provide people in the valley with their primary livelihood. In the past, given the scarcity of fresh milk produced by a single family, there arose the need to come together to work the small quantities of milk from small farmers. This was the start of the dairy cooperatives that in 1973 joined forces in the Primiero District Social Dairy, which began operations in 1981. Today, as in the past, in the summer season, the practice of the alpine pasture is widespread, guaranteeing fresh milk rich in those elements that only the high mountain can give; the same milk that is then transported to the valley and producing the delicious malga cheeses which in the Trentino are one of the best known symbols. Dairy art and milk processing are therefore a vocation for the Primiero and Vanoi Valleys and the Primiero Dairy is nothing but a place where mastery and history blend in a single structure that combines the best of tradition and innovation.
THE COMPANY
The Dairy Farm is a cooperative that has around 65 members, of which 19 are only employed in the summer, during the Alpine period, from the shepherd huts inside the Paneveggio Natural Park - Pale di San Martino, the most beautiful and intact corner of our Trentino.  Fresh milk is collected directly by the company's members both on the valley floor and at altitude.  The role of the Dairy Farm is to offer a range of services to its breeder members, to facilitate their craft, but also to directly manage a few mountain pastures in the summer.  It also directly manages two shepherd huts, the Agritur Malga Rolle on the pass of the same name and the Agritur Malga Fossernica in the Vanoi valley where you can enjoy the typical local dishes and own production cheeses, thus creating a direct chain between producer and consumer.  The Primiero Dairy Company employs 13 permanent and 4 seasonal employees for the operation of the dairy and of the affiliate shop, with 27 seasonal employees to manage the huts and the agritur. 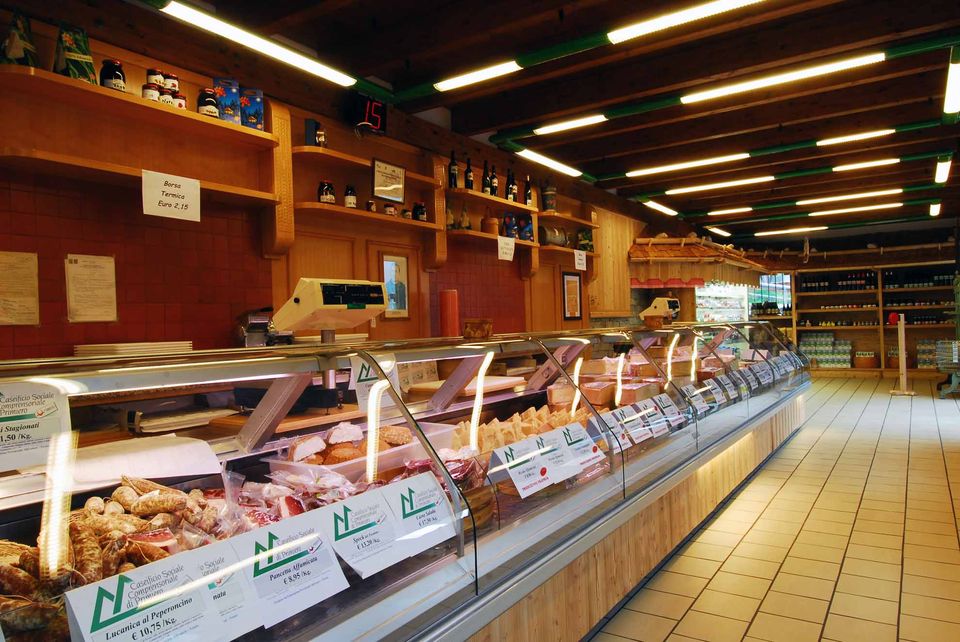 THE CHEESES
There are several cheeses that you can find in the Primiero Dairy outlet, able to satisfy a variety of tastes, from the stronger flavours to the more delicate ones. The raw materials (milk, rennet and salt) used and the dairy tradition that has characterised us for centuries are the ingredients on which our products are based, which, in addition to being good, are also healthy. The essentials Every territory has its peculiarities and typicalities.  Ours are "Tosèla di Primiero" a fresh curd (which tradition dictates should be tasted in slices and browned in butter), and the "Primiero" cheese whose name is associated with that of the territory that characterises its identity. Available in different seasonings, from a minimum of 60 days to 12 months, it is also found in the "Malga" version produced exclusively with alpine milk.  Recommended tastings These are added to others such as the "Fontal", for delicate palates, the "Dolomiti", a traditional Trentino cheese, the "Trentingrana" and the "ricotta", available fresh or smoked, excellent for seasoning first courses such as gnocchi and canederli [dumplings].  Most of the cheeses are produced with fresh malga milk worked raw, to keep all the bacterial milk strains in the cheese. La ChiccaOf particular interest is the “Botìro di Primiero di Malga”, raw cream butter produced only in summer with cream obtained by the natural skimming of malga milk.  The “Botìro di Primiero di Malga” is the only alpeggio butter recognised as Presidio Slow Food (since 2009) and can only be purchased in summer, subject to reservation to guarantee its quality and authenticity. 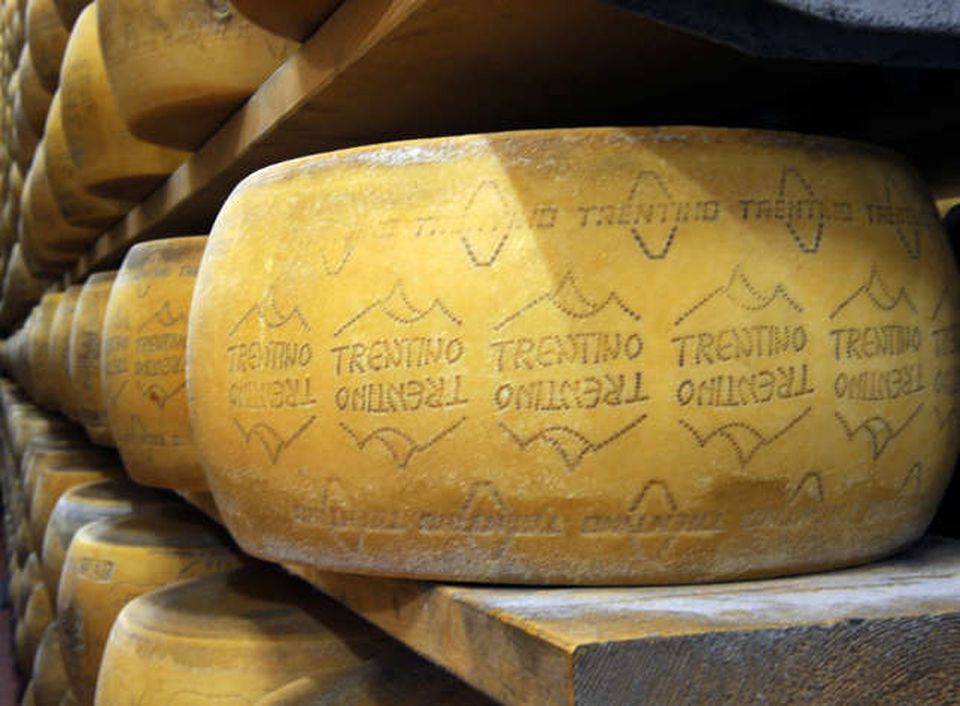 THE MILK
The quality of the fresh milk very much depends on how the livestock is fed.  The Primiero Dairy has always given prime importance to livestock feed; the cows reared in the Primiero mountains are fed following the season with dry hay, pasture grass and an integration of selected vegetable and GMO-free feed.  Silage products are not permitted.  That is why the same cheese produced at different times of the year presents pleasant differences when being tasted.  This is mainly linked to the type of processing that with the Primiero and Trentingrana cheeses takes place with raw, therefore not pasteurised milk.  This way of following and periodically controlling the chain allows the milk to be transformed in an artisanal manner using only milk, rennet and salt without additives or preservatives in accordance with the best dairy tradition.  Just how it was once performed in shepherds huts. 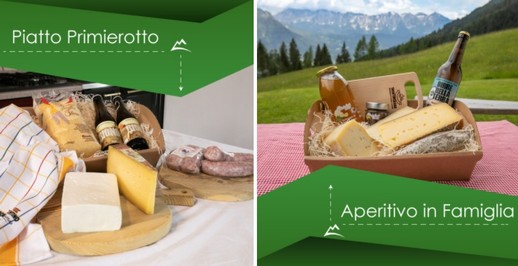 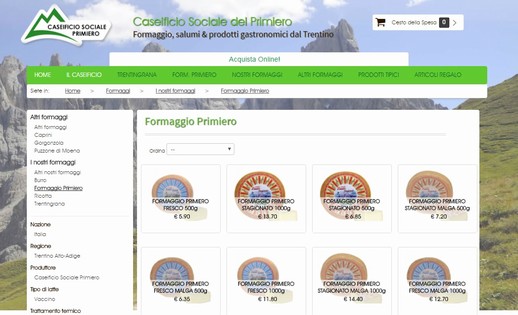 From the Primiero Diary typical and genuine cheeses straight to your table! The new version of the website is online, with a well-stocked e-shop where you can purchase the delicacies of the valley but also other gastronomic specialities of the area.  The products are sent to your home in a couple of days, fresh and ready for tasting.  The speed of the network is thus combined with the sale of products packaged without rushing, according to ancient recipes and traditions.  Typing in "Caseificio di Primiero", you will gain access to a truly productive reality and to its new virtual shop, where you can easily purchase all the delicacies of the valley - the Malga cheeses, the quality Trentingrana, the typical Primiero cheese and the renowned Tosèla - but also the dairy delicacies of Trentino and other gastronomic specialities of the area. In the e-shop you will find, for example, the sauces and preserves of the Agritur Dalaip dei Pape, the award-winning Bionoc artisan beers produced in Mezzano without dyes or preservatives, the fresh pastas and the delights of the Primiero Pasta Factory. The products purchased online easily reach your home, within a couple of days of ordering, by express courier, carefully packaged in a special thermally insulated box and kept fresh with dry ice. If instead you have planned a holiday with us, you can reserve the products online and then collect them at the point of sale on the dates and at the times agreed, avoiding queues and saving valuable time to visit the area and its highlights.
webcam
booking
discover smart
Lifts & ski slopes
Outdoor
social