The History of Primiero 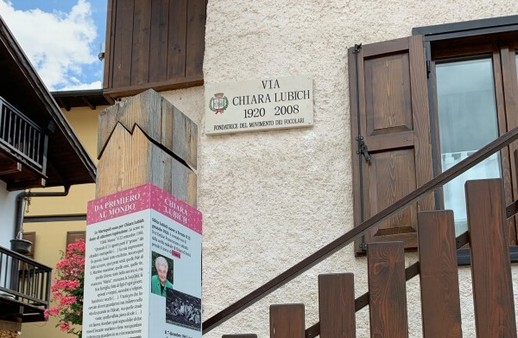 Chiara Lubich (1920-2008), founder in 1943 of the Focolare Movement (Work of Mary), is considered one of the most important spiritual personalities of the twentieth century.A Catholic, she was engaged in the forefront of ecclesial communion, in ecumenism and in interreligious dialogue including with people of non-religious convictionsShe was awarded 15 doctorates h.c. in various disciplines and different honours by national and international bodies, as well as honorary citizenships in major Italian cities and in Buenos Aires; she was also a tireless promoter of a culture of unity and brotherhood among peoples.

VISIT THE PLACES LINKED TO  THE FOUNDRESS OF THE FOCOLARE MOVEMENT:
THE CHURCH OF THE CAPPUCCINI
On 16 July 1949, at this church, Chiara and Igino Giordani, MEP, deputy, journalist and prominent writer, formed a pact of unity that they entrusted to Jesus the Eucharist. After finishing Mass, Chiara returned to church:"I had the impression that the Lord was opening, to the eyes of the soul, the Kingdom of God that was among us". It is the beginning of that mystical experience later called "Paradise '49".
ARCIPRETALE CHURCH - LA PIEVE
The church in which morning Mass and the evening function of the participants in Mariapoli took place, an authentic temporary citadel with a common law: the mutual love between participants resulting in a fraternity rich in material, spiritual, and cultural communion. On 22 August 1959, in this church, over a thousand mariapoliti representing the 27 nations present devoted their peoples to Mary with a prayer in 9 languages, including Chinese: it was a commitment to be united not only between individuals, but between peoples, to love the homeland of others as their own. And behind the altar, at the same time, some members also consecrated the policy. The Mariapoli would multiply, in time spreading throughout the world.
CASA DEI TURRA
To accommodate the ever increasing number of mariapoliti there were numerous families of Primiero who offered their homes with genuine hospitality.Bed bases and mattresses were divided and shared. In the house of the Turra, at Col, in the summers of '57 and '59, Chiara was accommodated with some of her companions: a coming and going of people, including personalities such as Father Lombardi and several Bishops, made it in fact the heart of the Mariapoli. Chiara understood that permanent Mariapoli could be born. On 22 September 1956, in fact, with Mariapoli concluded, she wrote an article for the newspaper Città Nuova in which she anticipated the reality of future citadels of the Movement. Today, there are 22 citadels in 19 countries, generally developed, and with their own characteristics.

COLONY OF PONTIFICAL COMMISSION OF ASSISTANCE
Hall of Sunday meetings of the Mariapoli in the second half of the 1950s, a place in which to  deepen one's spirituality, where people and groups of different backgrounds met, and communicated testimonies, also through songs and comedies. From year to year the Mariapoli of Primiero became more numerous, numbering 12,000 presences in the summer of 1959.

CHURCH OF SAN VITTORE
A destination for short walks, it offers a magnificent panorama of the valley: the darting rays of light of the Sun the moment it had set seemed to Chiara a symbol of the Verb as "the splendour of the Father". In those rays, the path that each person is called to follow, coming ever closer to the others while approaching God.
BAITA PARADISO
Inherited by Lia Brunet, one of them, Chiara and some companions arrived at this hut in the summer of '49: a small refuge, a kitchenette, a ladder leading to the attic, where corn and beans were being dried, and where the visitors laid out modest beds. It was the cohabitation, founded on mutual love in a time of particular illuminations, that resulted in the name of "Baita Paradise"

CHURCH OF SAN SEBASTIANO
Chiara came here every day with the focolarine for meditation in the afternoon. In her meditations and profoundly listening to what God may have wanted to suggest to her, she welcomed - not without wonder - particular insights on many realities of faith, realities that she would immediately communicate to her companions.

CAMPANILE MARIAPOLI
Upon a summit next to the wild Pala della Madonna, in Val Canali, above the Treviso Refuge, in the Group of the Pale of San Martino, in 1959, two mountaineers of Tonadico, Michele Gadenz and Tullio Bonat, assigned the name of Campanile Mariapoli, to seal their love for the valley for their guests who arrived from all over the world.

PRATO AND WELSPERG LAKE
The peace of the meadow and of the Welsperg lake, next to the historic villa in Val Canali,  are one of the destinations of the mariapoliti trips. Seeing the peaks reflected there, Chiara, lover of philosophy, reinterpreted Plato and his myth of the cave on "ideas" of things and on their "reality".

MADONNA DELLA LUCE
At Boaletti, next to the first hydroelectric plant of Primiero, was built a small chapel called Madonna della Luce.The hikes into nature inspired in Chiara  a page of high spirituality, which she would subsequently call "Maria, flower of humanity".

BAITA SEGANTINI
In the rare splendour of the Dolomites, today declared a World Heritage Site by UNESCO, the Pale di San Martino offer a unique scenery of pointed peaks and incredible rock cathedrals.And Baita Segantini is one of the best observation points there. During the Mariapoli, nature was for Chiara a great inspiration: "…I had the impression of perceiving the presence of God in all things".
﻿
Cookies help us to deliver our services. By using these services, you agree to the use of cookies on the Website. More info
webcam
booking
discover smart
Lifts & ski slopes
Outdoor
social
Travelling safely