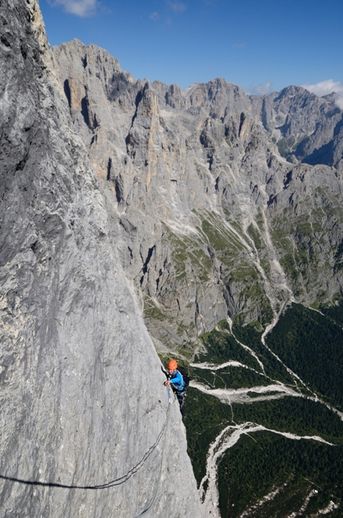 Rock Climbing
The exploration of the Pale di San Martino began around the mid-nineteenth century, when the area still belonged to the Austro-Hungarian Empire. English travellers, inspired by a romantic and decadent spirit, faced long and adventurous tours of the uncharted Dolomites, describing in their travel diaries the emotions sparked by the majestic Pale di San Martino. Since then, mountain climbing has evolved and thanks to new techniques and equipment numerous new climbing routes were "opened" in places that were once thought of as inaccessible, such as the “Spigolo del Velo” route, the "Buhl" route on Cima Canali and the "Solleder" route on Sass Maor, two classic climbs for any "grade 6 fans”.
In the Primiero valleys, climbing is possible all year round except in particularly cold years. Geologically speaking, climbing is mostly on granite, porphyry and limestone rock.
The numerous crags to be found on the Pale di San Martino, at Passo Rolle, in Val Canali and Val Noana, are an exceptional resource for the most demanding climbers: very useful as training grounds, they are found in different sorts of terrain and include various climbing grades. Natural crags with low to medium grades (around grade 4) are not numerous and are found only in the Passo Rolle area (Tax Police crag) and at the so-called "Sasso di Castel Pietra" (Castel Pietra Boulder) in Val Canali.
The indoor artificial climbing wall in San Martino di Castrozza, within the Sports stadium, is 18 metres high and has climbing routes up to grade 7c. Thanks to a teaching sector for novices, the wall is also suitable for beginners. The assistance of an Alpine guide is essential when taking one’s first steps in this fascinating sport.
webcam
booking
discover smart
Lifts & ski slopes
Outdoor
social
Travelling safely