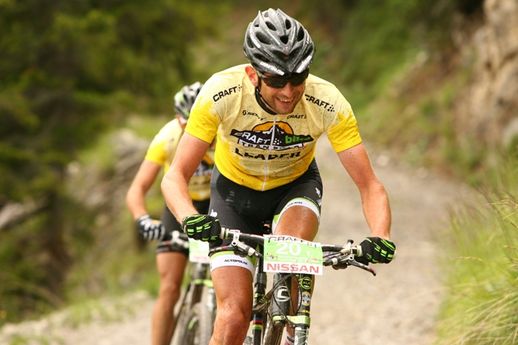 San Martino di Castrozza and the valleys of Primiero and Vanoi are a veritable paradise for bikers: the valley bottom, the grassy and wooded slopes, the high-altitude plateaus, all offer countless fun itineraries from April to October. This is the training ground of Massimo Debertolis, the home athlete who won the World Championship in 2004: born here in 1975, he grew up in the Valle di Primiero, where his family passed on to him a love and passion for the mountains, beneath the splendid landscapes of the Pale di San Martino. His desire to get closer to nature spurred him in 1993 to follow his brother Riccardo’s footsteps in mountain-biking, riding day after day through the breathtaking itineraries within the Paneveggio - Pale di San Martino - Nature Park. In 2004, Massimo Debertolis finally asserted his superiority in this sport and won the Italian championship in July in Livigno and then went on to win the Mountain Bike Marathon World Championships in Austria. In 2011, he reached third place in the overall Bike Transalp ranking but his triumph came in 2012 when, together with Marzio Deho (Team Adamelloski), he won seven of the eight stages of the race in the 80+ class, coming first in the general ranking for his category and arriving fifth in the overall ranking.
But his passion has not run out. Massimo Debertolis continues to live and train in these valleys that hold great thrills in store for bike enthusiasts as well as nature lovers: from easy outings along the bicycle path in the Primiero valley bottom to more challenging excursions on the flanks of the Pale di San Martino, Vette Feltrine and Lagorai range.

The thirst for freedom I had as a kid is still alive within me every day... riding on the paths of my valley at the foot of the Pale di San Martino...
“Massimo Debertolis, MTB World Champion”