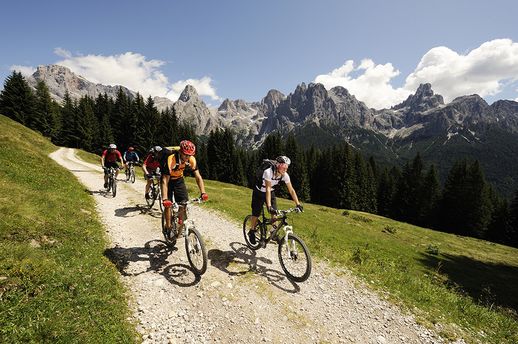 The Dolomiti Lagorai Bike area covers the a Mountain Bike region with 1100 km of off-road trails. These trails are composed of woods, pastures, alpine lakes and two National Parks: Monte Corno National Park (in the western part of the region) and Paneveggio National Park (east). The area is located in Eastern Trentino (northern Italy) and includes three valleys: Fiemme, Fassa, Primiero, Pinè Plateau and Valsugana. The trails which have been sign-posted in the area, invite MTB enthusiasts to explore the areas uncontaminated territories which lie above 2000m asl in the heart of the Lagorai chain, comprising of wilderness filled summits and porphyritic rocks, which retain water in numerous mountainous lakes. In addition, the Dolomite peaks of Latemar, Catinaccio, Sella and Pale di San Martino - recognized by UNESCO as some of the beautiful mountains in the world and have now been classified as World Heritage. Dolomiti Lagorai Bike aims to enrich its route network with numerous local services for MTB enthusiasts including : accommodation, bike shops, bike rentals, ski lifts, bike transport, MTB schools, guides and instructors. All routes are digitalized with GPS technology and sign-posting.

Grand Tour is a MTB itinerary of 6 days which stretches through woods, meadows and small  alpine lakes and two Natural Parks, Monte Corno Park westbound and Paneveggio Pale di San  Martino at Eastern. The area covers different valleys of the Eastern part of Trentino: Val di  Fiemme, Val di Fassa, Primiero, Pinè Plateau and Valsugana. This last one, with two bathing lakes: Levico and Caldonazzo, offers the unique beaches in the world with a view on the Dolomites.  All the tracks represent an open invitation to explore and discover pristine territories, at an  altitude over 2000 meters, among the wild peaks of the Lagorai mountain chain, the  Dolomites’ peaks of the Latemar, Catinaccio, Sella and Pale di San Martino declared a  “UNESCO World Heritage Site”. It is possible to run it for 6 months per year; during summer it is possible to use the lifts, open from middle June to middle September, to reduce the elevation.